It's Not A Drinking Fountain Either 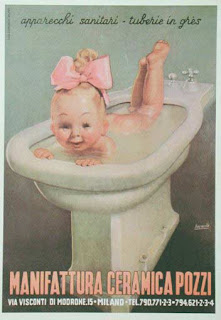 Kitchen & Residential Design is one of my all-time favorite blogs.  Its author, Paul Anater, has a terrific sense of design, but it's his sense of humour that keeps me coming back.

A while back Paul received an email from a reader asking for some ... assistance:

Help! My husband, my son and I were over at my cousin's new house last weekend and while we were walking around the master bath and oohing and aahing over the size and decor it was hard not to notice that she had one of those things (I blush when I say the word) next to the toilet. I can't help it, every time I see one they just scream out to me "We have lots of s*x and don't shower afterwards." Anyhow, my four-year-old asked why they had two toilets in the bathroom. I was embarrassed and didn't know what to say, so I told him that there were two so that no one had to wait while the other one finished. He said "nasty" and didn't push it any further. But seriously, what do you tell the kids?

Paul's answer cuts to the chase, and is exactly what I would have told the client ... right after I picked my lower jaw up from the floor.

I asked for Paul's permission to reprint this for two reasons:
Now before you accuse me of calling this lady "stupid", I used the word "ignorance", and ignorance is not the same as stupidity.  As ridiculous as I find her comments, I applaud her for asking for guidance in an area she obviously knows nothing about.  I've commented many times before about the multitide of product decisions faced when doing a remodel.  There's no possible way you can know about all of them.  So ask.  As silly as you think the question is, the only stupid thing to do would be to not ask and remain ignorant.

Hey! Thanks for the shout out!